On 2012-02-02 the first commit to Profanity was done by @boothj5. So now Profanity is already 8 years old! Happy Birthday! 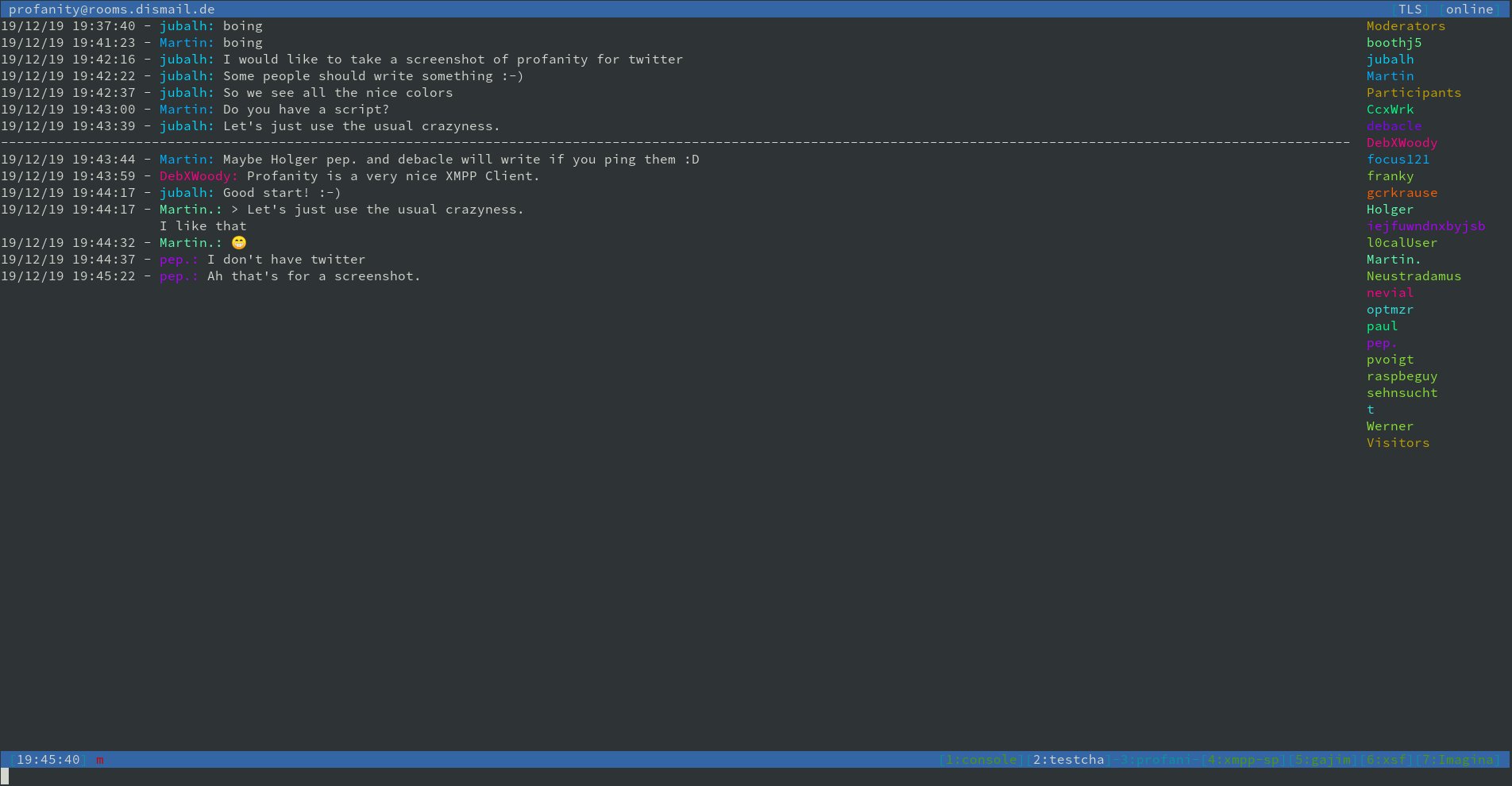 We got fingerprint autocompletion for the /omemo trust command.
We got a gruvbox and solarized theme.

You can now decide whether you want to have the MUCs name or JID displayed in the titlebar and roster: See /titlebar use [name|jid] and /roster room use name.

Profanity is now able to download user avatars via XEP-0084 #1240. Use the /avatar <jid> command. And open it with xdg-open ~/.local/share/profanity/avatars/<jid>.png from your terminal.

A trackbar was added so you can easily see where you last left off reading. #1238

Add option to store current line in history (like irssi down arrow behaviour) #200. Imagine you write a long line of text, only to find out someone else wrote something where you want to reply first. Now you can press alt+down-arrow to save the current line. Write a new one. Send it. And press arrow-up to get the saved line back from history.

You can now highlight unread messages with a different color in /wins #895. New theming option is cmd.wins.unread.

A keyboard shortcut to select the next window with unread messages has been added: alt+a #1114.

A command to reload your config has been added: /reload.

A possibility to specify an alternative config file has been added: Use profanity -c ~/path/to/other/config.

Preferences are not immediately saved once you change them. You will need to issue the /save command from now on. This has the advantage that you can experiment with different settings and themes and only if you are happy with your changes you save them. If not everything will stay as it was.

We changed the theme handling in Profanity. So far if you loaded a theme with /theme load bios it loaded new colors but also other settings the theme makes. Like changing the OMEMO char to X. If you decided you prefer # as your indication of OMEMO encrypted messages you set this in your preferences via /omemo char #. But if you later tried out different themes because you were set up with your current one it might have happened that you lost some settings #1077.

For this reason /theme load bios will now only load the colors of a theme. We have /theme full-load bios to load the complete theme.

Profanity has functions that display settings of a certain command. Like /logging displays the settings for group and chat logging. So you know what value they have before you change them. So far if you issued a setting command it displayed the information, but also informed you that the command was not valid Invalid usage, see '/help logging' for details.. This has been fixed. #1237.

XEP-0092 Software Version, sends now the name of your operating system too. You can switch this off with /os off.

In an attempt to standardize commands some functionality got reorganized in different/new commands:

Don’t print subscribed message if contact is already in roster #1166.

So far we just displayed the timestamp of the first tag we found. Now we fixed this to actually check for the oldest timestamp. Meaning that the time a message was send should now be when it was first delayed not the last or any other delay #1254.

Occupants and roster chars have never actually been saved! Seems noone discovered this for years until recently #1244.

If you configure Profanity to load the last few lines from the history in a chat window. It always displayed a date of 01-01-00 as this was hardcoded. Now it acually uses the right one. Seems this has gone unnoticed for years too #922.

We fixed many memory leaks. Profanity should be much nicer now if you plan to never quit it.