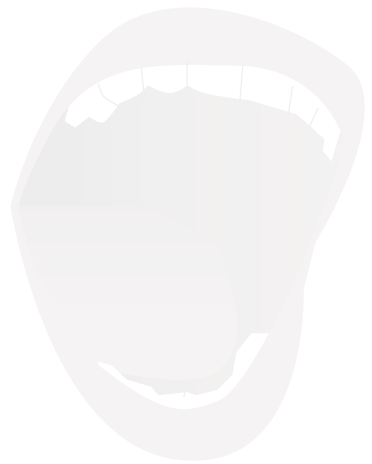 Profanity has OMEMO support since 0.7.0. Regular 1:1 chats should work without problems. We consider OMEMO MUC as experimental. You might encounter problems there. Make sure to check our tracker bug for details. And report anything you find on the issue tracker.

Enabling carbons (/carbons on) is recommended in order to enhance OMEMO and overall chat experience.

Filetranser is not OMEMO encrypted since this is not part of the original XEP-0384 but only a proto XEP.

/omemo fingerprint does autocomplete all fingerprints not just the ones for the JID mentioned.

OMEMO is an XMPP Extension Protocol (XEP) for secure multi-client end-to-end encryption. It is an open standard based on a Double Ratchet and PEP.

Profanity supports OMEMO only if you build from current git master. Support is planned for the 0.7.0 release.

If you have libsignal-protocol-c installed, support will be included by default. To force the build to fail if support cannot be included, configure with the following:

Before you can start using OMEMO for a particular account, you must generate the cryptographic material. Use the following command:

A message will appear informing you that the key is being generated which may take a few minutes. We use /dev/random for this.

If the generation takes a long time you can try to move the mouse or install an entropy daemon, such as haveged, to increase the available entropy. 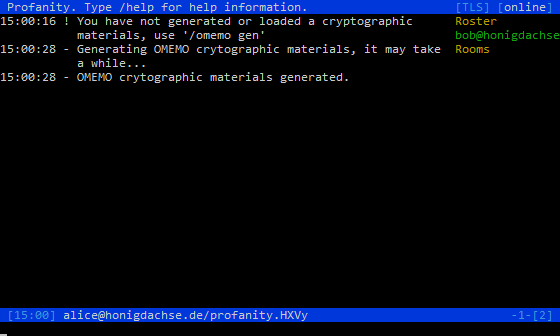 Once you have generated a key, you will not need to do so again. If you want to check your own fingerprint or see the fingerprints of your other devices type:

Hint: To be able to receive messages from your other devices you need to enable carbons. Also trust your own devices analogous to your buddies fingerprints, as described in the next paragraph.

Before you can start talking with a contact you need to authenticate him by trusting his fingerprint(s).

You should exchange fingerprints with your contact's via another secure communication channel. To display your fingerprint, use the following command: 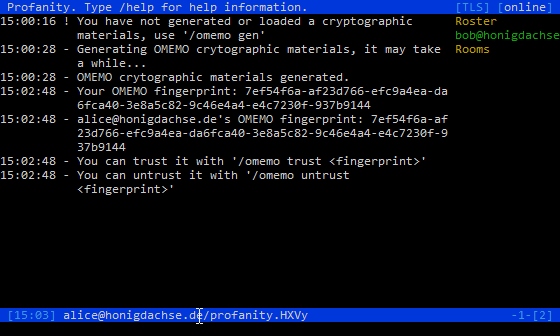 To view the fingerprint of a contact use the following command: 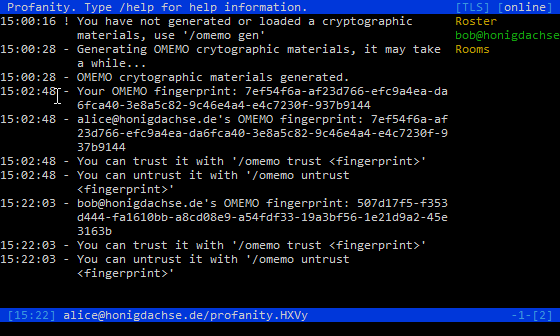 You can untrust a contact at anytime using the following command:

If you are already in a conversation window without OMEMO, you can start sending encrypted messages with the same command omitting the contact: 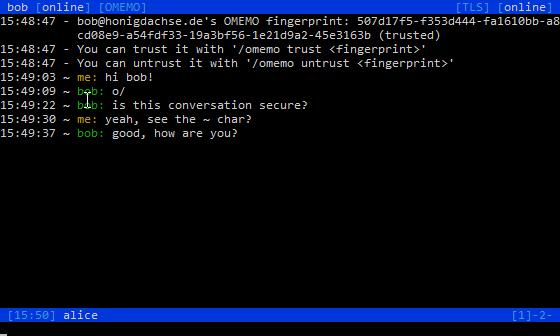 The [OMEMO] shown in the titlebar indicates that the conversation is now encrypted.

By default, OMEMO sessions must be started manually using the /omemo start command.

The following three settings are available:

manual - The default. Unencrypted messaging is allowed, OMEMO sessions must be started manually.

automatic - If you start an OMEMO session with a contact once via /omemo start it will remember the OMEMO session for this contact. So if you restart Profanity and use /msg bob@ejabberd.local it will OMEMO encrypt the conversation. You can stop this with /omemo stop.

always - OMEMO sessions are always started. Until you use /omemo stop.

By default, an indicator is displayed in the titlebar when no encryption is being used. 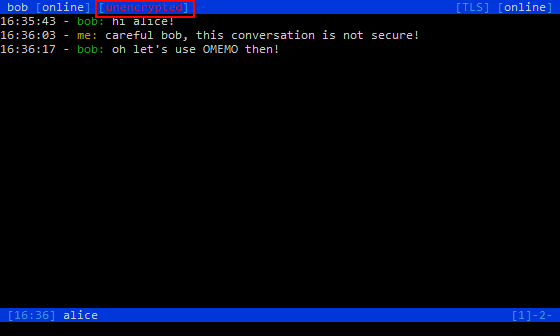 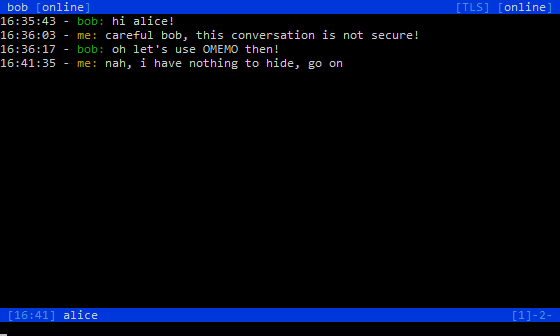 Both incoming and outgoing plaintext messages are always preceeded by the '-' character.

By default OMEMO encrypted messages are preceeded by the '*' character.

This character can be changed using the /omemo char command.

The /omemo log command may be used with the following options to control if and how OMEMO messages are recorded in chat logs.